My work as a specialist in Scottish forest heritage has given me the privilege of studying many remarkable ancient forests. One of my favorites is Castle Wood in the 13th century Caerlaverock Castle, the triangular water ruin south of Dumfries. Few visitors know the secrets of the old wood next to it, which recent research has only just uncovered. It is rich in hidden archeologies and characteristic ancient trees, all in the most atmospheric setting – on the Solway coast. The wood is a nature reserve and looks wilder every time you visit it, but it has a long history of management. As you explore here, you’ll discover medieval banking systems that include the castles built 800 years ago, while an even larger enclosure was added about 400 years ago, and there are banks studded with ancient oak trees and the occasional pollard. Away from the tracks, the wood is wet and wild, so bring rubber boots for serious exploration.
Dr. Coralie Mills, founder of the consulting firm dendrochronicle.co.uk 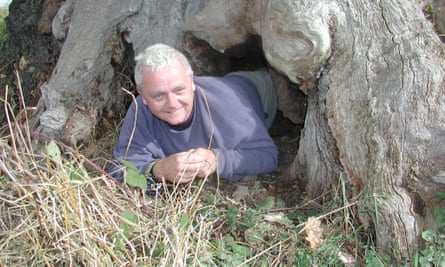 These tall limestone cliffs high above Llangollen are sublime. The combination of scree and steep slopes with a view of Castell Dinas Brân from the 13th century offers me an escape from everyday life. They are part of the Clwydian Range and the Dee Valley AONB and as such have unique flora and fauna. I’ve seen rabbits dancing, bright orange frogs hopping, and even the frenzied peregrine falcons diving for prey on the cliffs. I also had the opportunity to meet extraordinary trees. Some of the large trees of the Offa dike path that runs below grow here. The Llangollen whitebeam, an endangered species, grows almost exclusively here next to another tree treasure – majestic, windblown, old yew trees.
Rob McBride, tree hunter and founder of Treespect CIC 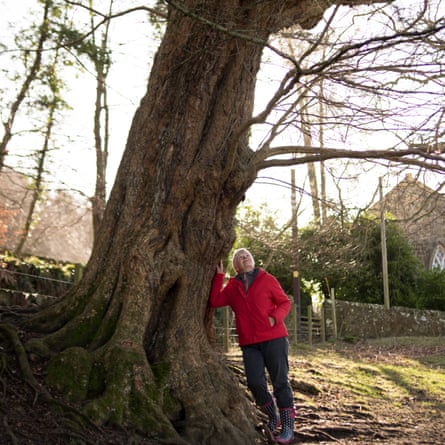 For incredible walks among old oaks, limes and sweet chestnuts, this is really the place. Fountains Abbey is signposted from Ripon on the A1. The Studley Royal water garden is a 15-minute walk from the car park. A local politician named John Aislabie inherited the Studley Royal estate in the early 18th century and, inspired by French landscape artists, built an amusement garden and wildlife park with paths, vistas and riverside follies. It is largely unchanged and was declared a UNESCO World Heritage Site in 1986. In 1767, Aislabie bought the ruins of neighboring Fountains Abbey and created the Surprise View – a beautiful view of the ruins with the River Skell in the foreground. I love this place: you feel alone with the beauty of the trees.
Judy Dowling, Volunteer Examiner, Ancient Tree Inventory, Woodland Trust

The short walk from Wendover to Coombe Hill can be done along the chalk step or the muddy Holloway route. The efforts are met with fame because the Chilterns are home to England’s largest beech forests. A popular spot on this hill, Low Scrubs, is full of pollards: trees that were previously felled to two or three feet to allow for timber harvesting and new growth. These are mostly long-serving beeches alongside hazel, hornbeam and cherry trees that are just as old; try to recognize them. Hundreds of years ago the locals gathered firewood here under common law until the Containment Act of 1805 gave a nearby village the entire place “for the poor of the community” to collect wood. It is now owned by the National Trust and is open to all. Visit in the spring when you can to jump among the bluebells.
Laura Alcock-Ferguson, activist and CEO of the Ancient Tree Forum

Growth old and new: Kinrara Forests and the Duke of Gordon Monument in the Highlands 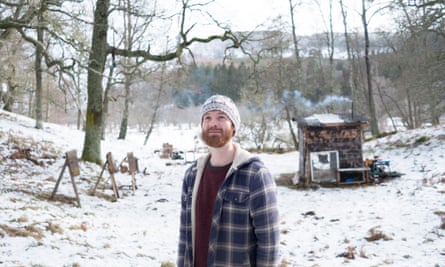 Tom Banks in his outdoor workshop in the Cairngorms. Photo: Anna Deacon

This place is a snapshot of the Scottish highlands, looking through the trees of lochs, small towns and rugged mountains. The trail is three miles from the tree canopy and gently climbs up a small hill to the monument to the Duke of Gordon. An old path meanders through a mixture of old silver birch, juniper and old gnarled Scots pine. The soil is covered with blueberries in summer and mushrooms in autumn. On the way, the forest opens up with a view over the river Spey onto steep valleys with green trees. That always makes me smile because I know these green spots are part of the innovative Cairngorms Connect project, which will bring all the small forests together into one forest and create a huge sanctuary for wildlife. As I near the top at the other end of an undulating path, the huge stone pillar of the Duke of Gordon monument appears. The view from here is of the spectacular Northern Corries and Cairngorm Mountain.
Tom Banks, wood carver

The forests are a bit “wild” in the heart of the borders. They line the base of the heather-clad Eildon Hills and are home to red squirrels, rare birds and majestic trees. I remember a little boy looking at them from my bedroom window: in the distance they looked dark and unrecognizable. A walk in a winter and a close encounter with deer turned it into a special place. I later went there with my mother in sunshine, rain and snow. These trips were a huge part of her life with Alzheimer’s. For me, every walk in Eildon Woods is a fresh adventure. In January I pause under snow-covered pine trees and watch gold combs and crossbills. In March I look for the first tender primroses, and May is the best month to read quietly among the mountain ash and the tangle of intoxicating flowering gorse. In August, I laze around in my favorite larch grove, mocking blueberries that bristle with distilled summer. A word of caution: According to the legend of Borders, the Fairy Queen also lives in these forests!
Tim Chamberlain, director Wild Tree Adventures 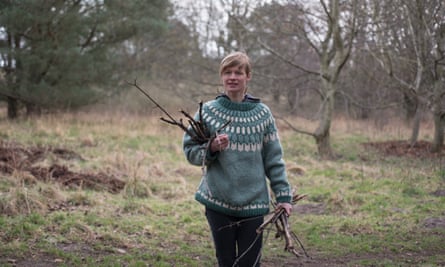 The adventure begins on my doorstep. To end my working days from home, I like to go to my closest National Trust forest area in Newhailes. I’m lucky enough to have it right across from me – it’s wonderful historic parkland with views over the sea and beautiful, mature forests. It is popular with dog walkers, that’s why I like to slip from the main paths into the overgrown forests, into the trees. I like to sit by the gurgling fire and just breathe. It is especially nice when it rains to be protected by the lush green canopy. Other days I like to be part of the symphony of birdsong, wind rustling in the leaves and trees talking to each other. I feel protected, cradled and happy there.
Anna Neubert-Wood, founder of WanderWomen 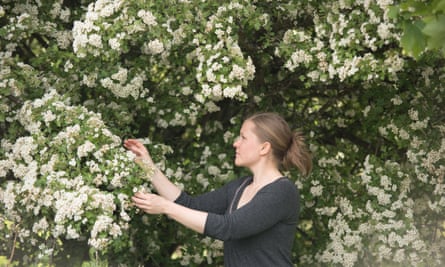 This path is something special for me: it leads past the old Birnam oak, a tough looking, wide and gnarled old tree that has been standing for six centuries. Next to it is the “Young Pretender” (a 300 year old sycamore maple), which is just as impressive. If you continue to meander along the trail alongside the rushing river, you’ll come across a small wooden bridge perfect for pooh sticks. If you turn right before crossing the bridge, you step into a magical little wood where you can see old trees and stumps worn by beavers’ teeth, tiny mushrooms growing from the mossy bark, and delicate meadowsweet flowers with their intoxicating scent. This could be the land of fairies if you believe in such things. If you stand very still, you may spot a red squirrel peeking curiously through the old man’s lichen (Usnea barbata). After a good strong wind, the lichen from the ground (the most sustainable way to harvest it) can be collected for medicine (it has antibacterial and antifungal properties).
Emma Roe, herbalist 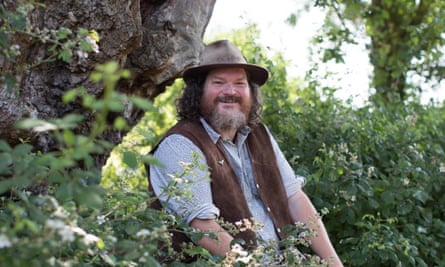 My favorite place under the trees is not famous or even known, but it is something special to me and has always played a large part of my life. It is the forest that I lived in as a child. We lived in a fairytale house in the woods at Amberley near Stroud in Gloucestershire. I would spend hours climbing the trees. I would of course be attracted to different trees at different times. I had trees that I felt comforted by, trees that would inspire me, trees that I could play with. If I visit this woodland again today it still has the same magic, but it is far less visited and cared for these days. We have to go to the woods, play there and enjoy them. They will respond by holding you tight and partying. I’m a tour guide and I believe my relationship with this forest has helped me share the glory of our sacred landscape with others.
Tor Webster, tour guide, Glastonbury 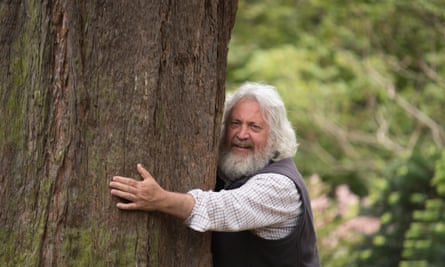 My favorite spot under the trees is the magnificent Redwood Avenue in the Benmore Botanic Garden in Argyll. It is one of the most spectacular garden entrances in the world. Of the 50 trees planted in Benmore in 1863 shortly after that tree was introduced to Britain, a duplicate set of 49 trees has survived. The avenue extends over 500 meters, and many of the trees are now well over 50 meters tall. Strolling through this living cathedral, with its towering branches almost touching in the high canopy, is both humbling and inspiring. Humble to see how small we humans are under trees that are only young people compared to the massive trees in California that can grow up to 80 meters and can live to be over 3,000 years old. In Benmore, however, climate change has resulted in subtle changes in rainfall patterns – wetter winters and drier springs. Hence, remedial action is now needed from the horticultural team to save this road and inspire future generations.
David Knott, Curator, Royal Botanic Garden, Edinburgh

How to Create a Travel Blog – My Fox Wisconsin Travel Journal

A Look at the Chicago Area’s Summer Lineup – NBC Chicago