Surabaya, the third-largest city of Indonesia, is one of the country’s cleanest and greenest holiday destinations. It is bountiful in friendly people and known for its delicious Java food.

The city and its people played an important role during the Indonesian War of Independence against the Dutch empire. Surabaya has since been called the City of Heroes, or Kota Pahlawan.

According to legends, a 12th century psychic king from the Hindu Javanese Kingdom prophesized a fight between a giant white shark and an enormous white crocodile. This fight was foreseen to happen in today’s Surabaya. This prophecy is commonly interpreted as the foretelling of a later event, where the Mongols invade the said land.

This is just one of the interesting things to know about Surabaya. Spending more time on its grounds will certainly give you fun-filled memories. If you want only the best things to do in this exquisite city, we’ve prepared a guide for you.

Get to know the history of cigarette production in Indonesia.

The House of Sampoerna is an interesting Dutch-style edifice built-in 1932. It is used to house Sampoerna’s first and major cigarette production facility.

Today, it is a museum composed of three buildings showcasing its colorful history of tobacco production.

Relax at a park that consists of mini-parks 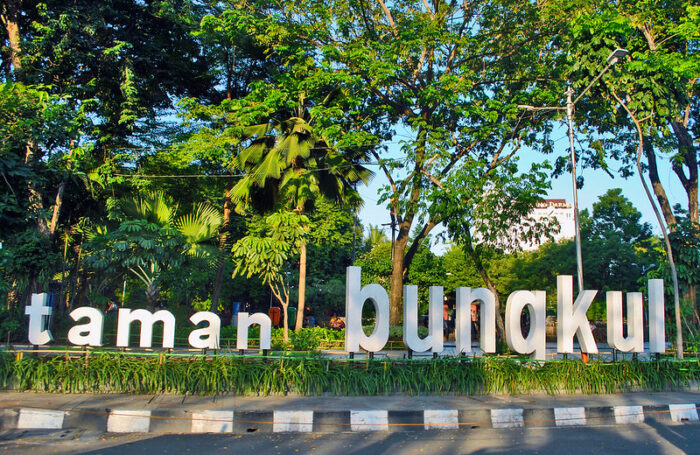 Surabaya is home to bountiful parks, and Bungkul Park is one of the most enticing and among the largest. Visitors of all ages will enjoy the calming vibe of this well-landscaped park. Apart from a 360-degree view of nature, there are also many wondrous sights waiting for your discovery.

This vast park contains miniature parks where every visitor is bound to have fun. There’s an amphitheater to take pictures in, swings and slides to play with kids, and many opportunities to bike and skate.

There’s also a hub full of kiosks selling flavorful snacks and tea juices. If you’re up for a relaxing place that’s free of charge, this park is a great place to visit!

Spend a day at the country’s largest waterpark 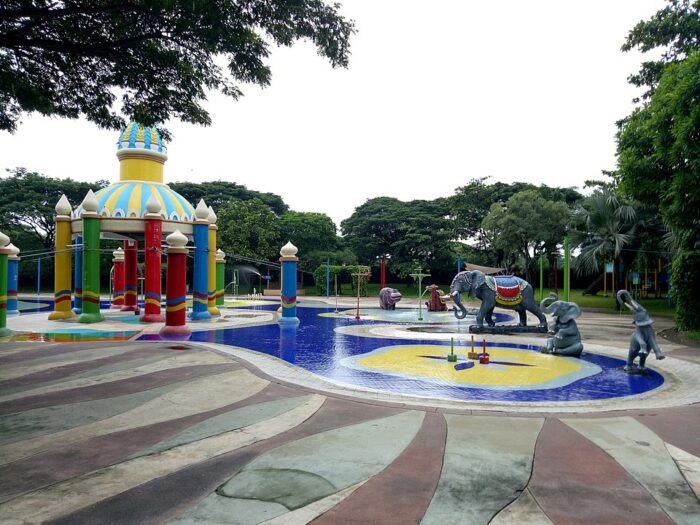 Your trip to Surabaya is incomplete without visiting the biggest water attraction in Indonesia. The Sinbad-themed Ciputra Waterpark sits on a 5-hectare land area, guaranteeing a wide variety of water adventure to enjoy for visitors.

Among the crowd-favorites are the Sinbad Playground, the 3,000-liter water drum, and the 1,800-meter wide Syracuse Beach. This tourist attraction is also known for its state of the art 480-meter artificial river. 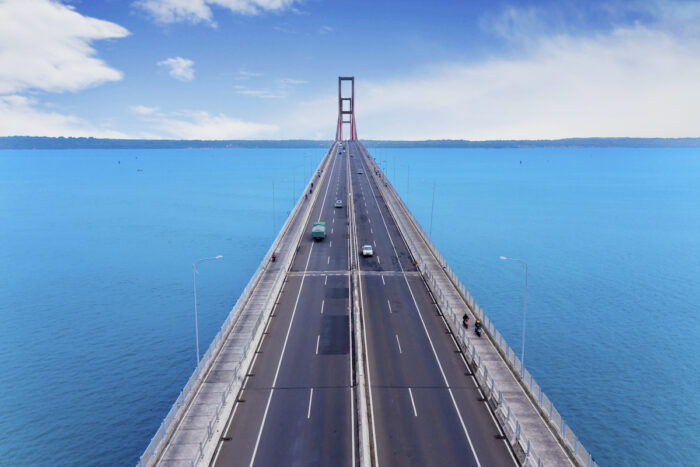 Connecting the city of Surabaya and the island of Madura is the eclectic Suramadu Bridge. This 5.4-kilometer bridge is the longest in Indonesia, featuring stunning cable-stayed portions of 630 ft and 1,424 ft in length.

There are only a few iconic bridges in the world, and they are stellar sights to behold. If you want to see one of the most beautiful land links in Asia, this is a must-see for you. 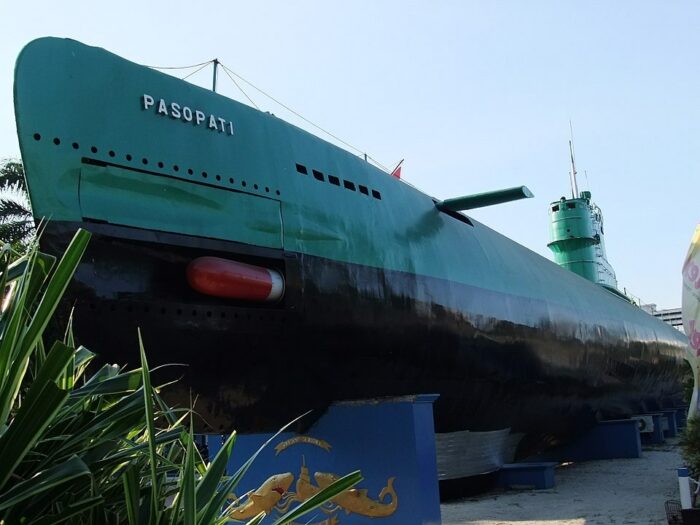 The largest submarine monument in Asia can be spotted in the south of Indonesia’s Surabaya. This 249 ft-long Russian built Surabaya Submarine Monument was used by the Indonesian navy between 1960 to 1990.

Today, you can tour the insides of this well-preserved submarine, including its crew quarters, control room, torpedo room, even its periscope. If you want to have a unique museum-like tour, this should be a go-to place.

Be greeted by Suro and Boyo.

One of the most iconic symbols in Surabaya is the white shark and white crocodile, which was prophesized to engage in the strongest and most powerful battle.

The shark is known in Indonesia as Suro, while the crocodile is said to be named Boyo. Together, Suro and Boyo greet locals and tourists through their famous Suroboyo monument that stands in the middle of the city.

Whether you’re walking by foot or in transit by car, this stellar monument is hard to miss.

Commemorate the fallen heroes of Surabaya 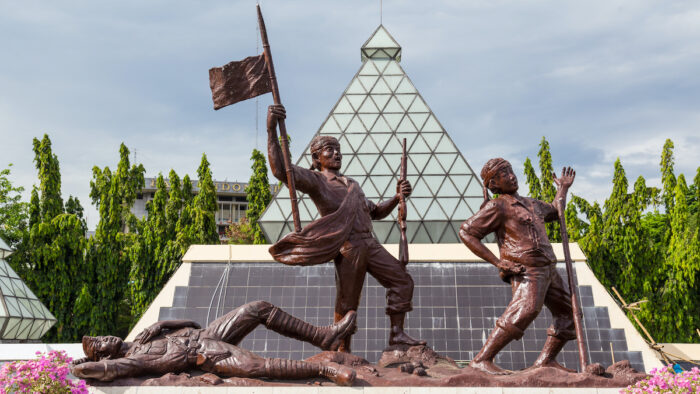 The ‘City of the Heroes’ features a post-independence public art. It is a way to give honor to the fallen heroes during the Battle of Surabaya. The Heroes’ Monument, also known as Tugu Pahlawan, is one of the most famous city center landmarks.

Apart from commemorating this city’s heroes, their weapon of choice has also made rounds since the iconic Battle of Surabaya dated November 1945.

The soldiers’ sharp bamboo to defeat the Dutch can be seen loud and proud in the middle of the Jalan Panglima Sudirman street. It is on this street that you’ll see the famous Bambu Runcing.

If you’re interested in a cultural trip to immerse yourself into the city’s triumphant times, these sets of monuments are a must-see for you.

Regain peace of mind through a bamboo park

Bamboos can be used in many ways, like building roads, making clothes and accessories, and scaffolding.

One of the most natural and relaxing uses of bamboo is undeniably before it gets processed. If you’d love the calming effects of viewing a landscaped bamboo park with towering trees, the Bamboo Forest in Surabaya is a must-visit for you.

Here, the air is fresh, and the ambiance will encourage mindfulness, the perfect recipe for the more peaceful mind.

Shop until you drop 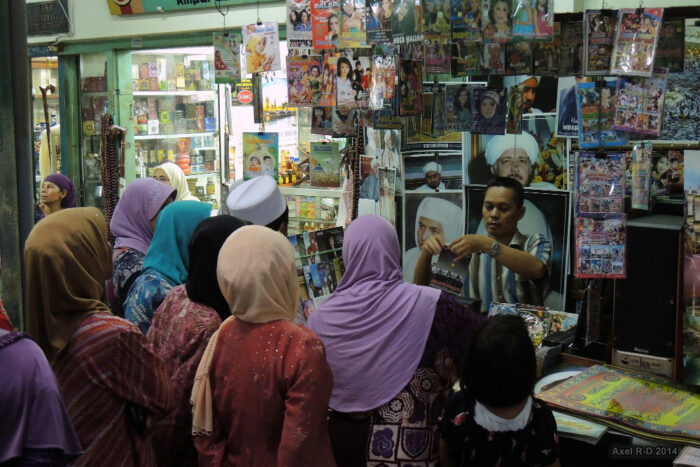 Surabaya is home to many antique shops and handicraft boutiques. You will find several interesting textiles, clothing, and accessories here. The Arab Market is among the most famous shopping places.

This quaint market place also sells a wide variety of spices, perfect for cooks and foodies alike. If you’re a serial shopper, you will love the Pakuwon Mall, Gateway Mall, and Tunjungan Plaza.

You will find local and branded products in these shopping malls, all sold at competitive price points. 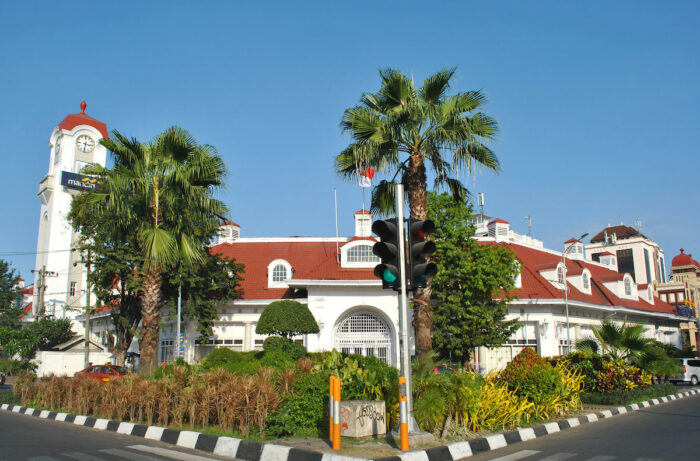 If you want to see the local neighborhood from years ago, seeing the actual scenery is better than any photos out there. Fortunately, the city’s frozen-in-time Old Town is open for the public to see.

Don’t miss out on seeing popular landmarks like the city’s traditional post office and the iconic Mandiri Bank. If you’re up for a trip down the city’s memory lane, this is a recommended place!

Visit some of the most unique mosques there is 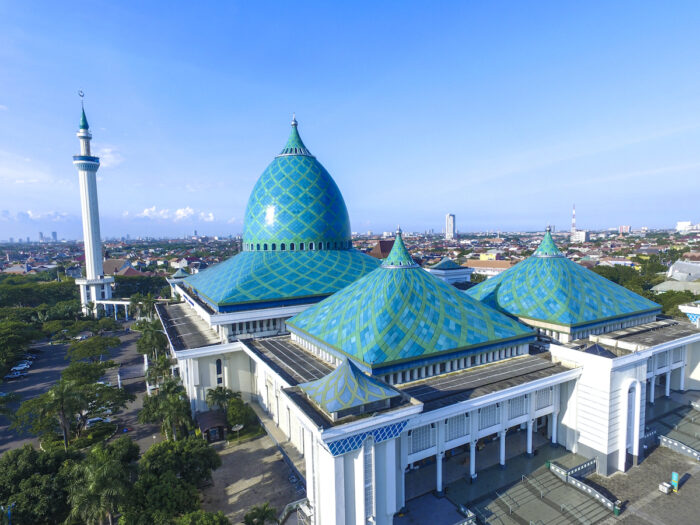 Many Indonesians are Muslims, which guarantees that you are bound to find stellar mosques in the country.

In Surabaya, there are numerous unique mosques, and Masjid al Akbar is certainly one of them. Whether or not you are a Muslim, the distinctive blue domes and the interesting 99-meter minaret will amaze you.

If this does not pique your interest enough, did you know a mosque dedicated to Muslim Chinese people in Surabaya?

The Cheng Ho Mosque is located in Palembang, looking like a traditional Chinese edifice, which is one a kind. Traditional-looking mosques are usually Arabian architecture inspired. 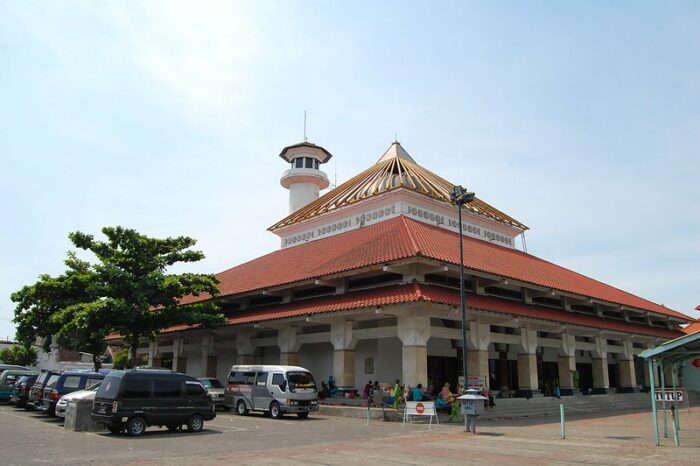 Apart from blue-themed and Chinese architecture-inspired mosques, Surabaya is also home to the oldest mosque in East Java. The Ampel Mosque was built in 1421 and also features the tomb of Sunan Ampel, one of the nine revered saints relevant to the spread of Islam in Java. 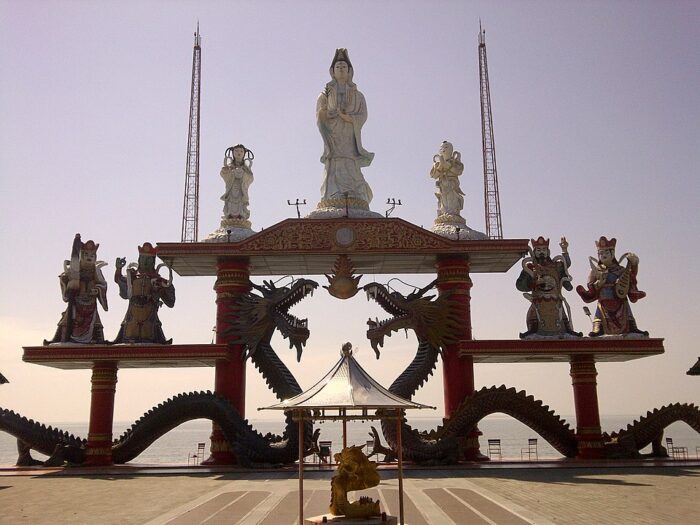 Although the majority of Indonesians are Muslims, Indonesia is home to people of varying beliefs. There are Protestants, Buddhists, and Hindus in the country too. If you’re interested in running into temples, Surabaya certainly has fabulous options for you.

Sanggar Agung Temple is a temple dedicated to Chinese deities as well as other Asian religious icons. Expect a Chinese-looking temple, which Mulan-enthusiasts will love.

Kong Co Kong Tik Cun Ong Temple is also a must-visit. Although this is primarily a Buddhist temple, it also hints Confucian and Taoist influences, a spiritual gem, and a culture mine.

If you want to see a temple, tomb, and bathhouse in one, the archeological site of Trowulan will amaze you. The ability of this site to captivate hearts and attention is not only a modern-day situation.

It has also graced some 14th and 15th-century Javanese poems. If you want to see more of the beauty Trowulan holds, you can also visit the Trowulan Museum.

This museum is home to the valuable relics discovered within this landmark’s vicinity. If you want the best-looking photos, a picture at the Wringin Lawang gate is a must-have.

Lounge at a rooftop deck 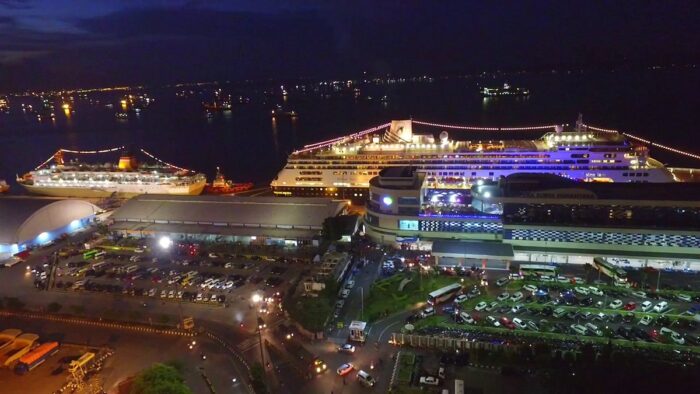 The Surabaya North Quay is a famous tourist attraction in Surabaya. It is a skyscraper rooftop deck capable of giving you the best angle of the city.

For a more cultural experience, you can order a cup of traditional coffee and a plate of their traditional dish. 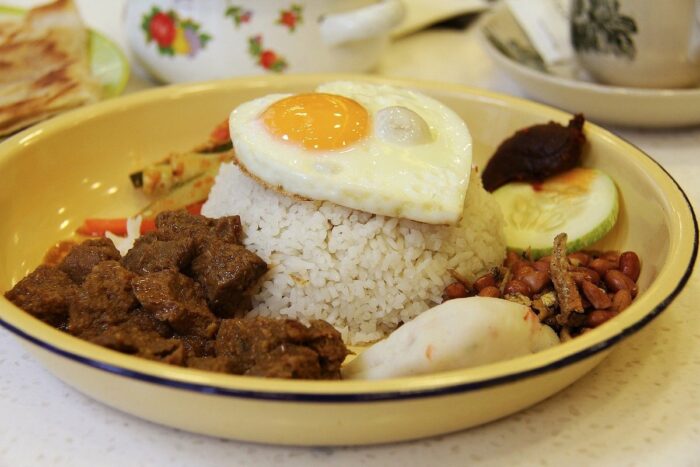 Indonesia is one of the top coffee-producing countries, and its ‘kopi luwak’ is the most expensive coffee in the world. Their traditional coffees are usually on the darker profile and bolder flavor.

The prominence of an earthy taste is also observable. If you’re a more sensitive coffee drinker, you will taste a bit of spice and wood, featuring the finish of unsweetened cocoa.

The country’s dishes are also very delicious and sought-after. When visiting Surabaya, the Indonesian Satay, Beef Rendang, and their very own fried rice are a must-try.

If you are fond of Indomie, which is heavily exported abroad, then the authentic Indonesian version is also a must-taste for you. 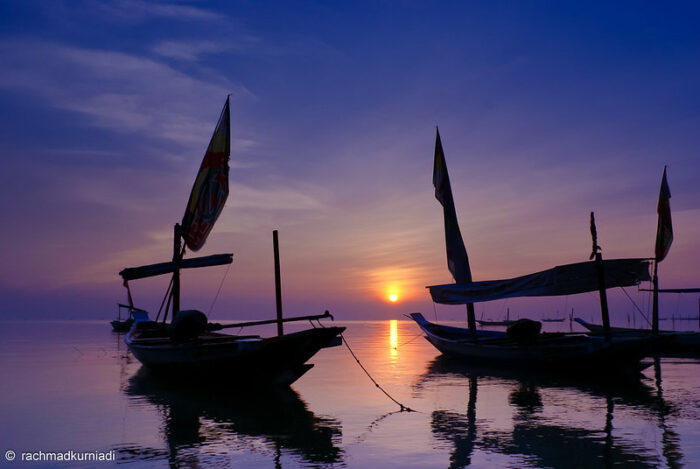 Surabaya is home to many excellent tourist attractions, but Indonesia’s trip is never complete without seeing its pristine waters.

If you want the most idyllic beachside holiday, you should never miss the heavenly Kenjeran Beach, also known as Pantai Kenjeran. It features gentle waves, clear waters, and oil painted skies. This is perfect if you want to relax by the seaside, go for a walk, sail a bit, and catch fresh produce.

If you want more iconic walks along the beach, especially for a fascinating video, the Bentar beach is a must-see. It features a wooden deck that extends to the sea, offering fantastic scenery for videos, photographs, and real interactions.

You won’t run out of seaside options in Surabaya. You can also enjoy in Delegan Beach, Boom Tuban Beach, and the Nepa Beach.

To help you plan out your vacation to Surabaya, we listed places to visit and other amazing things to do in Surabaya, Indonesia. We also listed links to some of the best travel deals, tour packages, excellent flight deals, and accommodation options.

Searching for the best hotels, resorts, and affordable flights in the nearby Cities? Check out our list of affordable Acapulco hotels and resorts via Agoda, Booking, or you may also see available Airbnb properties in the city.