The sanctuary has been a haven for those seeking a cure for disease. Source: Liz Sier

We only had time to cover the sanctuary or Asklepion, which was approached on an 820 meter high sacred path with colonnades – the Via Tecta. In this place, people with health problems could bathe in the water of the sacred spring, and in the dreams of the patients, Asclepius (according to the story) would appear in a vision to tell them how to cure their illness. Galen, the most famous doctor of the ancient Roman Empire, was born in Pergamon and worked in Asklepion for many years. The temple of Asclepius, the treatment center and an underground passage are still preserved.

Our hotel that evening was in the coastal city of Izmir – the starting point for many tourists to the fame of the fantastic UNESCO World Heritage Site Ephesus (Efes). For many centuries Ephesus was ruled by many different peoples, up to the Romans, among whom it was second only to Rome in terms of size and importance. 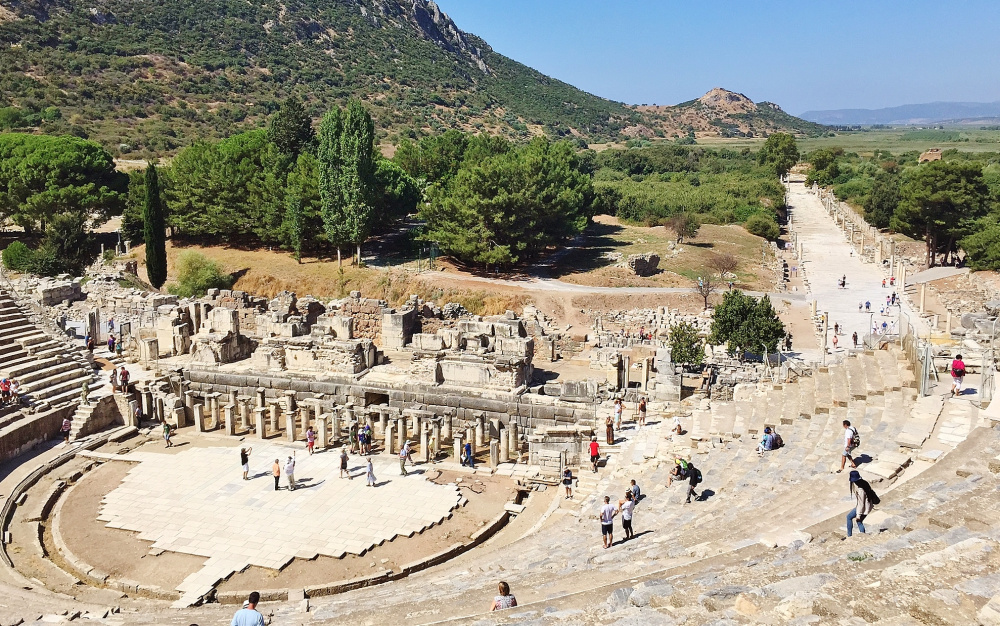 The city was famous for the Temple of Artemis (Diana), the library of Celsus, and a theater that could hold 25,000 spectators. It is considered to be the largest open-air theater of antiquity and was initially used for plays and later for gladiatorial competitions. In fact, we found a gladiator cemetery within the complex. Ephesus contains the largest collection of Roman ruins in the eastern Mediterranean, although it is estimated that only 15% have been excavated to date. The Temple of Artemis has virtually disappeared, and artifacts are going to museums in London and Istanbul.

Originally built in AD 125, the library has been carefully rebuilt from original pieces and is recognizable worldwide as the symbol of Ephesus. The city also had temples of the emperors Domitian and Hadrian, the latter of which has been partially restored, a smaller odeon or theater for plays, several bathhouses, very advanced aqueducts and water mills. There is also a fascinating public latrine system – a place to sit and chat with friends while nature takes its course!

Ephesus was an important center for early Christianity from the 1950s. It is believed that the apostles Paul and John lived and preached there. A basilica dedicated to St. John was built in the 6th century AD in nearby Selçuk, which we then visited. According to legend, Mary, the mother of Jesus, lived nearby. The House of the Virgin Mary is a popular place of pilgrimage for Christians and Turkish Muslims. The house was much smaller than we expected and there were long queues and fast moving. It has been restored and now serves as a small chapel. There is also a “wishing wall” where visitors leave prayers of intercession written on paper that they can stick in crevices in the wall. A spring supplies the believers with holy water. There is also a baptismal font that is now empty.

The amazing landscape of Pamukkale near Denizli in Western Turkey looked like a white wonderland full of tiered wedding cakes and was the attraction of our next day. The calcium carbonate-rich water that flows down the slopes from the hot springs at the top evaporates in the terraced pools, leaving crystals that decorate the surface like icing. This deposit eventually hardens and forms the travertine terraces. The word Pamukkale means “cotton castle” in Turkish – an apt description. We had to take off our shoes to explore the pools, while many other tourists also put on swimsuits to take advantage of the highly reflective surfaces for their tan. It is believed that the water also has healing properties. Some areas are understandably closed as this geological oddity needs to be protected. 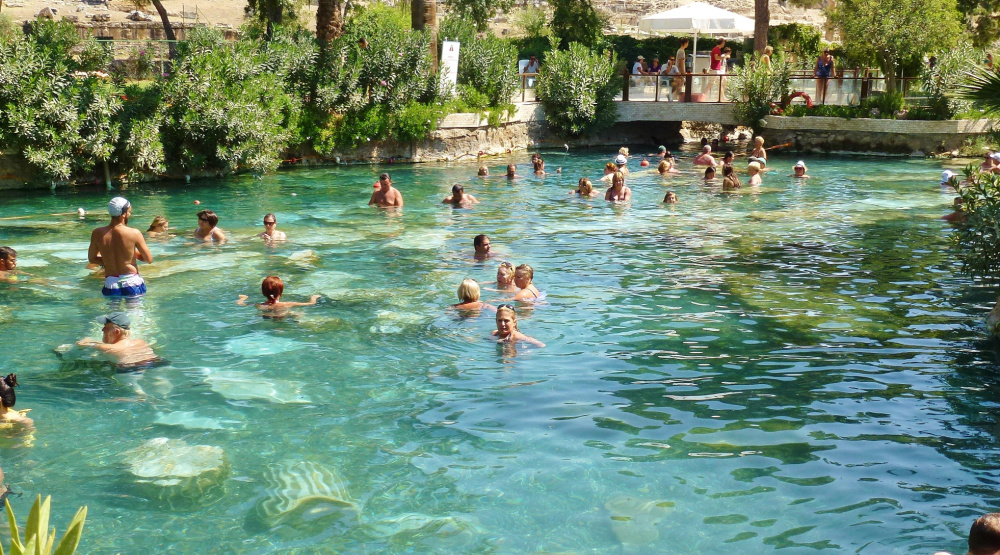 Tourists are encouraged to take a dip in the pristine waters of the Antique Pool. Source: Liz Sier

Since the Greco-Roman times, when the city of Hierapolis around 190 BC When the spa town was founded, tourists have been coming to the thermal baths for thousands of years. After the area was declared a World Heritage Site in 1988, hotels at the top of the hill were demolished and traffic restrictions were put in place as human activity caused the site to degenerate. However, tourists are encouraged to soak up the water in the ancient pool by the main area to relax and refresh. The pool takes its name from the large sections of Roman columns that lie below. On a hot day like the other, the green outdoor dining area was a welcome oasis to enjoy freshly made cheese and spinach (Gözleme) and enjoy a cold yogurt drink (Ayran) or the Turkish Efes beer.

After a short walk we came across the remains of Hierapolis. This became one of the most famous cities of the Roman Empire in the fields of art, philosophy, and trade, as well as an important center for Christianity. Although most of the city’s buildings were destroyed by various earthquakes and the building materials were “repurposed” by the locals over the centuries, the huge amphitheater still remains an imposing place.

Further down the old road we discovered a huge necropolis – the City of the Dead – which stretched for 2 km. It is one of the best preserved in Turkey and contains over 1,200 graves of various types depending on the wealth and position of the deceased. Aside from simple plate graves for the poor, there are a large number of sarcophagi, both partially buried and elevated, even on top of other graves, as well as family crypts or mausoleums that look like small temples. Particularly interesting are the tumuli, or round burial mounds, which had a small door and a tunnel that led to a large interior space, again for several burials.

After the long bus trip from Pamukkale to Antalya on the Saphir Coast, we had a free day to choose what we wanted. Antalya is the largest Turkish city on the Mediterranean coast with over a million inhabitants, which grows to several million during the holidays. The area contains narrow cobblestone streets, historic houses with traditional Turkish and Greek architecture, and a Roman arch known as Hadrian’s Gate. There are even famous Greco-Roman ruins near Perge, Aspendos, and Side. Some of our groups went to these ancient sites but Hubby felt a little ruined and decided to go golf while I rented a car and drove to explore one of Turkey’s natural wonders – Köprülü Kanyon National Park and its tiny Roman Oluk Bridge, barely big enough for my little car. 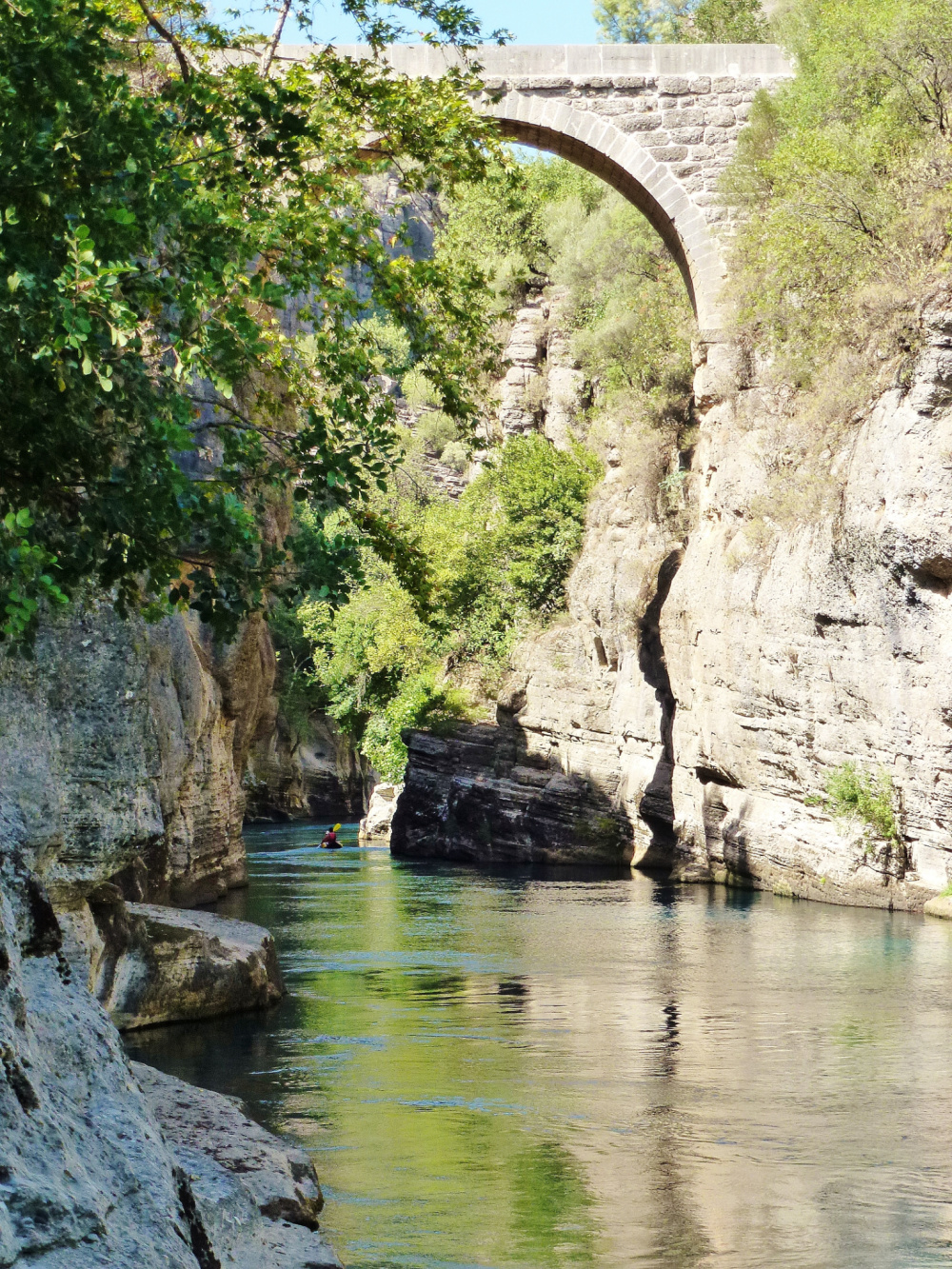